Volunteer Prunes Overgrown Vegetation on Juanita Bay Bridge
Volunteer Sharon Albrecht spent 10 hours this July cleaning up the overgrown vegetation that was poking through the wooden railings on the bridge. Thank you Sharon for a job well done! 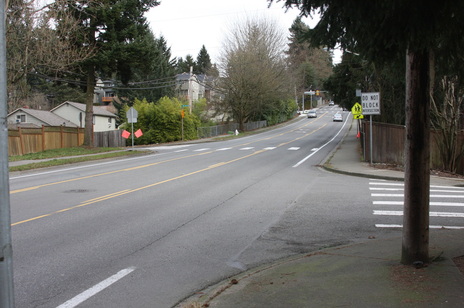 Rapid flashing lights will be installed on this crosswalk on NE 132nd St at 105th Ave NE.
Two projects will receive funding after being submitted to Kirkland's Neighborhood Safety Program. In this pilot program, $150,000 was offered up for projects in the Juanita, Finn Hill, and Kingsgate neighborhoods. $56,600 of that money has been allocated for the two Juanita projects.

Rapid Flashing Beacons will be installed at the crosswalk on NE 132nd St at 105th Ave NE. This is just west of Juanita High School and has been the site of accidents and near misses involving pedestrians.

A trail connection will be built from Forbes Creek Drive to the Cross Kirkland Corridor between 113th Ct NE and 115th Ct NE.

The dedication of three of 7 historical interpretive signs sponsored by Juanita Neighborhood Association, City of Kirkland and Kirkland Parks have been installed. The first two signs are at Juanita Beach. The last three, dedicated in April, were made possible with the addition of a grant by 4Culture. Two are at the north end of the bridge and tell the story of early Juanita and the importance of the Juanita Bay Bridge. The third one is located mid bridge and tells the story of the steamers that used to carry passengers to and from the Forbes dock before the lake was lowered.

Two additional signs will be installed by end of 2014. One will tell the story of Juanita in the 40’s and 50’s and another mid bridge will tell the history of the pilings still remaining in the bay.
﻿
2014
2013